You are here: Home / Environment / FEMA and Hurricane Sandy 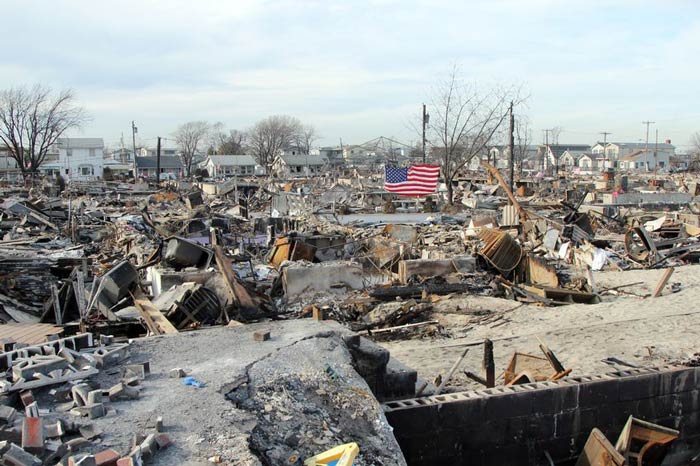 Was FEMA’s Response To Super-Storm Sandy What It Should Have Been Or Not?

FEMA’s response to Hurricane Sandy did not have the operational tempo or overall preparedness in the wake of this massive and destructive hurricane that took 72 lives. It also would pose flooding problems for small towns and big cities alike along the eastern United States. FEMA was ready from a monetary stance to shell out 60 billion in complete emergency spending. However, this is not saying, this response is what it should have been. This is because the process of appropriation was strongly driven by politics.

For what response that FEMA didn’t make, the National Guard, and Coast Guard was able to clearly make up for, and FEMA’s lack of preparedness and relief efforts were not forgotten as not being up to par then. Staten Island was left to fend for itself, several days after Hurricane Sandy, and they had no federal assistance. They not only did criticize FEMA, but also did those who lost everything in New Jersey, who had communication issues with them. FEMA’s response wasn’t what it should have been. This is the undeniable truth.

Sandy Versus Katina: Were The Responses To Both Monsters Hurricanes The Same?

Despite the fact that there were some comparisons between Hurricane Sandy and Hurricane Katrina in some ways. The truth is this. The responses between the two were different, and this is because the response of FEMA to Hurricane Katrina was a whole lot worse to be honest. Sure, FEMA did not handle things in good operational tempo or total effective preparedness, but one must give them credit by saying they did do better with Hurricane Sandy than Katrina.

The government had no clue what was going on, or what it was doing, right after Katrina happened. The government, as well as, FEMA did seem to be less in the fog with Sandy. Therefore, with this said, both responses to these monster hurricanes were different in their own ways.

FEMA did respond to Hurricane Sandy far more effectively than they did Hurricane Katrina. Nonetheless, despite this fact, they still did fail in key areas and one of them was in the overall management of flood insurance claims after this horrible hurricane did hit the East Coast and lay siege to lots of towns and cities there with flood waters and destruction on a grand scale. There were countless Hurricane Sandy survivors who were low-balled, as far as, their claim payouts went. There was also altered engineering reports that did surface.

When Senator Menendez did have a hearing concerning the flurry of rampant allegations of fraud and criminal activity with FEMA in connection to Hurricane Sandy, one of the top officials at FEMA decided to converse with Senator Menendez to turn things around for FEMA. This meant that he was going to blacklist any of the engineering firms, as well as, any insurance carriers who did attempt to do anything outside of the law that was criminal. He also decided to reopen all existing flood claims from Hurricane Sandy once more. He was determined to get FEMA back in a good light and not be in a bad light anymore.

The National Flood Insurance Program needed to be completely overhauled and a lot of things changed for the betterment of everyone.

How Can A Plan of Action Be Put Into Place To Properly Address Monster Hurricanes?

The best plan of action to put into effect for future monster hurricanes is not an easy one. However, over the course of time, between Hurricane Katrina and Hurricane Sandy, it is very clear that the emergency management of disasters of this magnitude is indeed getting better. There are vast improvements between the overall response between Katrina and Sandy. Though FEMA didn’t respond very well to Katrina, they did do much better with Sandy, despite some of the failings that were still apparent to all. The best plan of action for a catastrophe such as hurricanes, tornadoes, and the like isn’t etched in stone.

Nonetheless, FEMA can learn from their past mistakes, and try to rectify them with future disasters that do take place. They can be determined to address these monster hurricanes as best they can and to the best of their ability.